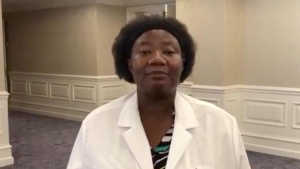 Stella Immanuel, a doctor praised by U.S. President Donald Trump as “very impressive”, is a pastor and an active conspiracist, reported BBC News.

In a viral video that was retweeted by Trump and one of his sons, Dr. Immanuel claims that the anti-malaria drug hydroxychloroquine can cure COVID-19 and she has treated over 350 patients with it, according to the report.

This comes after both the World Health Organization and U.S. Food and Drug Administration have cautioned the use of the drug in treating coronavirus patients.

The BBC report added that Dr. Immanuel is the founder of Fire Power Ministries in Houston, a platform she has used to promote other conspiracies. Born in Cameroon, she graduated with a medical degree from the University of Calabar in neighboring Nigeria and has a valid doctor’s license.

Her other claims include that alien DNA was being used in medical treatment and that scientists are working on a vaccine to prevent people from being religious. She also believes that witches and demons are responsible for some medical conditions.

She even declared that Jesus Christ would destroy Facebook’s servers if her videos were not restored to the social media platform.

A Ban on Bus and Subway Alcohol Ads in New York