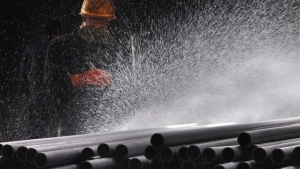 China’s Ministry of Commerce announced Saturday that it will continue to impose anti-dumping duties on imports of alloy-steel seamless pipes from the United States and the European Union.

The latest measures will take effect on Sunday and will last five years, the ministry said in a statement.

China started to impose anti-dumping duties ranged between 13 percent and 14.1 percent on imported alloy-steel seamless pipes from those regions in 2014 on the grounds that the products were being dumped on the Chinese market at below market prices.

In May 2019, the ministry launched a final review investigation in response to domestic industry applications, founding that such dumping still existed.

The ministry stated in the review that if the five-year anti-dumping measures are terminated, the dumping of alloy-steel pipes and damage to related domestic industry may continue or recur in the country.

Based on the investigation results, the ministry proposed to continue to implement the anti-dumping measures where the scope of products subject to anti-dumping duties is consistent with the original scope in 2014.

Last June, the country hiked the tariffs by as much as ten times while the review was underway and those levels of duties now remain in place.

Duties of 101.0 percent to 147.8 percent have been imposed on U.S companies including Wyman-Gordon Forgings while European firms such as Vallourec Deutschland GmbH and Vallourec Tubes France will be subject to duties of 57.9 percent to 60.8 percent, the Commerce Ministry said on its website.