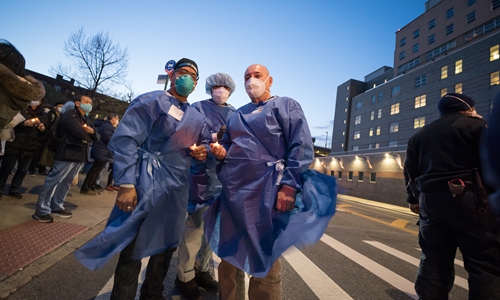 Elmhurst Hospital Center holds a vigil for colleagues and patients who have died during the pandemic on Thursday in New York. Photo: AFP
Governor of the U.S. state of New York Andrew Cuomo said that his meeting with President Donald Trump on Tuesday “went well” and their conversation on the COVID-19 pandemic was “productive.”

The two discussed how the state and the federal government could work together on the novel coronavirus testing, which is “the big issue” at the moment, said Cuomo on news channel MSNBC after his meeting with Trump.

“It has to be a real partnership and I think we had a very good conversation,” he said.

“The state should determine where tests are taken and how they’re allocated … But we need help from the federal government to make the supply chain work for the manufacturers, on these reagents, on the test kits, et cetera,” said the governor.

According to Cuomo, he and the president agreed to join efforts in realizing the “aggressive goal” of doubling the current rate of testing in New York, which is 20,000 a day.

The governor also told Trump about the need for the states to get funding from the federal government as “the states are in desperate shape.”

“The President seemed very open and understanding of that and said the next piece of legislation that passes, he’s going to be open to that,” Cuomo told MSNBC.

He also told Trump that New York does not need the Navy hospital ship Comfort docked by the west side of Manhattan any more. The state and the city no longer lack hospital beds after passing the plateau recently and “if they (the federal government) need to deploy it somewhere else they should take it,” he said.

The president and the governor had waged a war of words during the past weeks over the roles of Washington and the state on various issues including restarting the economy, testing and funding.

“It was just honest and open,” Cuomo commented on his first in-person meeting with Trump after the pandemic erupted. “We have a tremendous job that we have to get done and put everything else aside and do the job and that was the tone of the conversation — very functional and effective.”

At his daily briefing earlier on Tuesday, Cuomo announced New York will take a regional approach to reopening. Decisions will be made on which counties to open and when to open them based on the facts and data specific to that area.

As of Tuesday evening, New York State reported over 258,000 confirmed COVID-19 cases, more than any other country in the world except the United States. Over 19,000 people in the state have succumbed to the disease, according to a running tally kept by Johns Hopkins University.