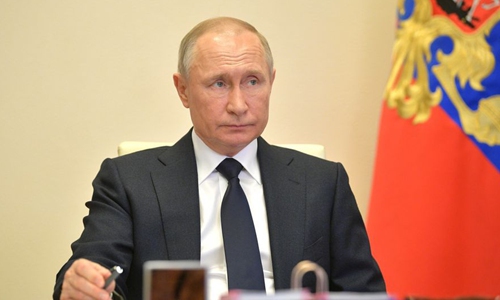 Russian President Vladimir Putin attends the online meeting with members of the government at the Novo-Ogaryovo state residence outside Moscow, Russia, on April 15, 2020. (Kremlin photo)

Russia and the US on Saturday commemorated a historic meeting of US and Soviet forces during WWII as an example of how their countries can “build trust and cooperate.”

The meeting of Soviet and American forces at the Elbe river in Germany on April 25, 1945 is seen as a milestone in World War II, foreshadowing the defeat of the Nazis.

A joint statement by Russian leader Vladimir Putin and US President Donald Trump on the 75th anniversary said the Elbe meeting illustrated how the two countries could work together.

It is “an example of how our countries can set aside differences, build trust and cooperate in the name of a common goal,” according to a statement published by the Kremlin and White House.

“As we work today to confront the most important challenges of the 21st century, we pay tribute to the valor and courage of all those who fought together to defeat fascism,” it added.

“Their heroic feat will never be forgotten.”

In a video published on Twitter, US Ambassador to Russia John Sullivan said the meeting at the Elbe was “a symbol of what we can achieve when we work together for a common cause.”

Putin on April 16 postponed a landmark military parade to honor the 75th anniversary of Soviet victory in World War II, as Russia struggles to contain the rapid spread of the coronavirus.

The “risks associated with the epidemic, whose peak has not passed yet, are extremely high,” Putin said in an address to the nation at the start of a meeting of his Security Council.

The Kremlin said that Putin believes the global coronavirus pandemic is an opportunity for his country to work together with the US.

“President Putin believes this pandemic is the time to help each other,” Kremlin spokesman Dmitry Peskov told reporters. “This is very positive and the US president told Putin of this readiness during the recent phone call.”