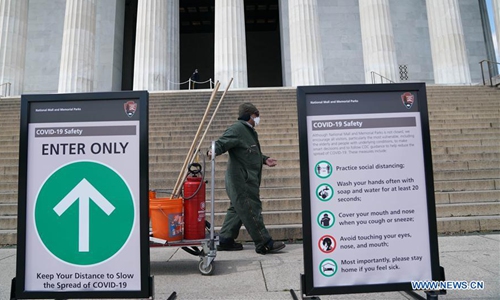 A cleaner walks by two placards reminding people of COVID-19 safety at the Lincoln Memorial in Washington D.C., the United States, on April 16, 2020. (Xinhua/Liu Jie)
Former US Secretary of State Madeleine Albright has called for cooperation among countries to combat the COVID-19 pandemic.

In her interview with the Australian Broadcasting Corporation Radio National on Thursday, Albright said that combating COVID-19, which she described as “a very tough situation”, requires international cooperation, including with China.

“We need to figure out where we cooperate, where we compete,” said the former secretary of state under the Bill Clinton administration, adding that a country, even one as big as the United States, needs partners and cannot solve problems alone.

“It doesn’t take a genius to figure out that climate change affects everybody, or nuclear proliferation, or pandemics, and that therefore diplomacy is the language where we try to develop partnerships and work together,” she said.

As the death toll from COVID-19 is increasing across the Unites States, the White House has tried to deflect criticisms about its earlier blunders by blaming others.

Claiming the World Health Organization (WHO) failed to share information in a “timely and transparent fashion,” President Donald Trump last week decided to halt his nation’s funding to the agency, a move that has drawn opposition at home and abroad.

As of Friday night, the United States reported more than 890,000 COVID-19 cases with over 51,000 deaths, according to the Center for Systems Science and Engineering at Johns Hopkins University.

Judge denies Oregon push to limit US agents during arrests

Portland prepares for US agents to step back from protests

Top international news stories that gripped the world in 2019