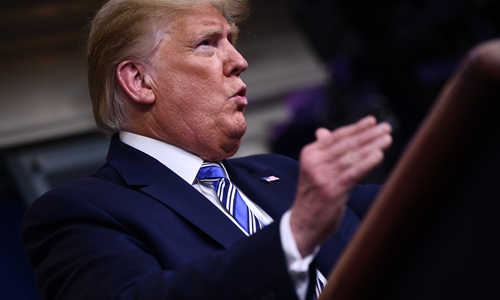 US President Donald Trump said on Wednesday he has ordered the US military to attack and destroy any Iranian vessel that harasses US Navy ships.

“I have instructed the United States Navy to shoot down and destroy any and all Iranian gunboats if they harass our ships at sea,” Trump said on Twitter.

US Deputy Secretary of Defense David Norquist called Trump’s tweet “an important warning to the Iranians,” while not saying whether the US has altered its formal rules of engagement in the Gulf.

“What he was emphasizing is all of our ships retain the right of self-defense,” Norquist told reporters in a briefing.

“We know how to translate that into our rules of engagement … They are based on the inherent right of self-defense; they are based on hostile intent and hostile act,” General John Hyten said, vice chair of the Joint Chiefs of Staff.

Trump was referring to an incident that took place on April 15 while US Navy vessels were engaged in exercises as part of their patrols in the region.

No shots were fired, but the Pentagon said the Iranians engaged in “dangerous and provocative actions” that risked collision or worse.

The Iranian Revolutionary Guard Corps (IRGC) boats “repeatedly crossed the bows and sterns of the US vessels at extremely close range and high speeds,” coming at one point within 10 yards (nine meters) of the bow of one ship.

The much smaller IRGC Navy vessels ignored warnings from the US ships for about an hour before finally responding to radio communications and then leaving, the US side said.

On Sunday, the Revolutionary Guards accused the US Navy of “unprofessional and provocative behavior” that had interfered with their own exercises, according to Mehr News Agency.

Iran vows to target US warships if security threatened

10 killed in blast at military parade in southern Yemen