Brazilian President Jair Bolsonaro on Tuesday named a family friend to head the federal police, days after his justice minister quit and accused the president of meddling in law enforcement for political motives. 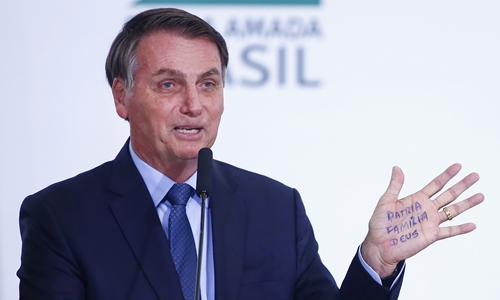 Brazilian President Jair Bolsonaro shows written on the palm of his hand “Homeland, Family, God” during a ceremony to mark his 400 days in office at the Planalto palace, in Brasilia, Brazil, on Wednesday. Photo: AFPThe controversy over the appointment and allegations by outgoing minister Sergio Moro of improper interference in the police force triggered talk of impeachment and a criminal investigation approved by the Supreme Court, distracting from the coronavirus epidemic that has killed 5,017 people in Brazil.

The government’s official gazette confirmed the appointment of new federal police chief Alexandre Ramagem, 48, who took charge of the president’s security after he was stabbed on the campaign trail in 2018. The selection comes amid investigations of alleged wrongdoing by Bolsonaro’s sons.

Ramagem, who joined the federal police in 2005, has the fewest years of service of any officer tapped to lead the force. He has run the Brazilian Intelligence Agency since July.

On Friday, Justice Minister Sergio Moro alleged in a stunning televised address that Bolsonaro had repeatedly said he wanted a “personal contact” in the top police job “from whom he could get information, intelligence reports.”