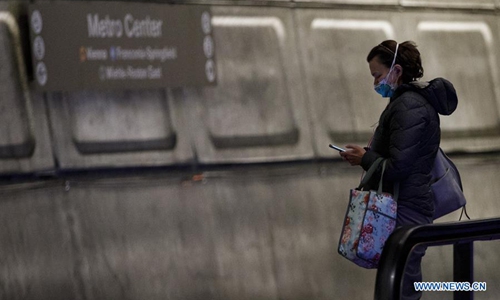 A resident wearing mask is seen in a metro station in Washington D.C., the United States, March 31, 2020. Health experts on the White House Coronavirus Task Force said Tuesday that even with the Trump administration’s national social distancing guidelines in place, Americans still should be prepared for the prospect of the coronavirus causing 100,000 to 240,000 deaths in the country. (Photo by Ting Shen/Xinhua)

A prominent US pandemic model on Monday significantly increased its coronavirus death forecast after parts of the country began reopening.

The Institute for Health Metrics and Evaluation (IHME) now foresees 134,475 deaths by August 4, up from 72,433 projected in an April 29 estimate.

Previously criticized for being too optimistic, the model’s projections will now be more in line with those of other estimates, several of which have already forecast that the US would exceed 100,000 deaths by the beginning of June.

IHME’s new estimate takes into account the lifting in some states of restrictions on movement and gatherings, as well as residents’ mobility during confinement, thanks to anonymous data provided by phone apps and other platforms.

“The social distancing that has occurred has actually, in most settings, been quite effective,” said Christopher Murray, director of IHME based in Seattle.

“There have been many, many states where mobility is starting to go up, even before the social distancing mandates are coming off. So we’re seeing a rise in mobility” which over the last seven to 10 days “is likely leading to some increased transmission,” Murray said in a statement at the University of Washington.

A government document cited on Monday by two US newspapers forecasts that new coronavirus cases will surge to around 200,000 per day by June 1 and the daily death toll will rise to roughly 3,000.