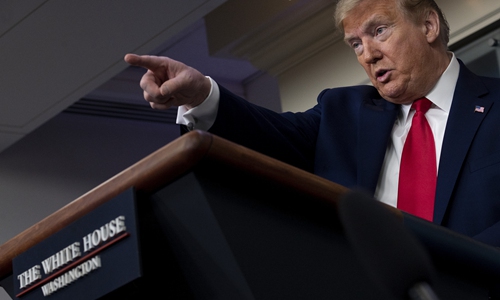 US President Donald Trump speaks during a Coronavirus Task Force press briefing at the White House in Washington, DC, on Sunday. Photo: AFP

A political action committee has launched to counter false and misleading statements about the coronavirus pandemic from US President Donald Trump with a wide-ranging, tech-infused social media campaign.

Defeat Disinfo, which started last week, plans to use “a sophisticated set of tools that allows us to spot misinformation just as it’s beginning to go viral on social media,” according to a statement.

It also aims to promote the “truthful counter narrative” about the novel coronavirus with tweet-for-tweet responses to limit the impact of inaccurate information.

Curtis Hougland, director of the committee and head of a technology firm, said artificial intelligence would play a role in the effort.

The technology “uses techniques such as natural language processing and machine learning classifiers to determine the emotions, themes and messages animating the conversation in a predictive way,” Hougland said.

“The technology is unique in its ability to geo-infer the location of data to understand the attitudes of voters in states such as Wisconsin or Arizona. We also have the ability to identify who has interacted with or been exposed to disinformation.”

He said this technology “was incubated and tested at the front-line of ISIS propaganda” and has been updated for the latest initiative.

The committee is not aligned with any candidate but argues that Trump “is denying the facts on his administration’s coronavirus response,” adding that “we’re holding him accountable.”

“President Donald Trump is the largest amplifier of disinformation in the United States,” said Hougland in a statement.

“People are dying as a result of his political agenda.”

The effort is already in full swing with messages aimed at pointing out the danger of Trump’s comments suggesting injecting disinfectant could help fight the coronavirus.

Defeat Disinfo said that it would not use automated accounts or “bots” to amplify its messages but seek an army of people, including prominent individuals sometimes described as “influencers,” to counter the president’s narratives.

Hougland said the organization is working to build a network of some 3.4 million “credentialed content creators and social influencers.”

“The organization will rely on real stories from real people,” the group said in a statement.

The group said it would “map” tweets from Trump’s account which are gaining traction as part of the effort to push back at false claims.

Hougland said the organization would be seeking to self-fund, largely with small donations, offering no other details on its finances.