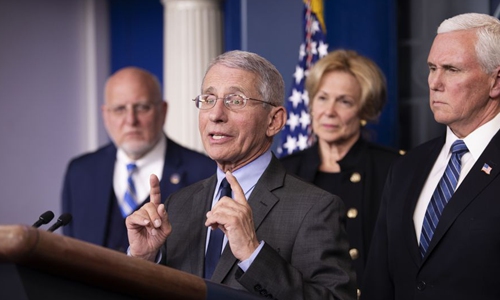 Anthony Fauci (front), director of the US National Institute of Allergy and Infectious Diseases(NIAID), attends a press conference on the coronavirus at the White House in Washington D.C., the United States, on March 2, 2020. (Xinhua/Liu Jie)
The Trump administration continues to muzzle voices unfavorable to their priority – securing ballots for their own political interests while ignoring people’s lives amid the COVID-19 pandemic, analysts said on Saturday after the White House blocked a key member of the administration’s coronavirus task force from testifying about COVID-19 response at a hearing next week.

Amid American and international voices urging the US to stop politicizing the pandemic and act actively on curbing the COVID-19, the White House has blocked Dr. Anthony Fauci from testifying at a Democrat-led House hearing next week.

White House spokesman Judd Deere said they stopped the director of the National Institute of Allergy and Infectious Diseases from attending the hearing because “it is counterproductive to have the very individuals involved in those efforts appearing at congressional hearings,” US media reported.

Fauci has a steady presence and won public trust with plain words amid the crisis. He also caught President Donald Trump’s ire for criticizing the administration’s slow action and failure to curb the contagion, which could have saved more lives, media reported.

The pandemic has now infected more than 1.1 million Americans, which accounts for one-third of the world’s total. the death toll topped 65,000 in the country, according to data compiled by Johns Hopkins University.

President Donald Trump is facing enormous domestic pressure, and at the key time before the upcoming elections, he does not want Fauci’s views, which are likely to have  a negative impact on him, to be amplified at a House hearing, Li Haidong, a professor at the Institute of International Relations of the China Foreign Affairs University, told the Global Times on Saturday.

Fauci stressed in a Tuesday interview the need for a “productive partnership” between states and the federal government, as the US continues to grapple with coronavirus testing shortages. Trump had earlier painted the states’ requests for help with testing as a “partisan issue.”

On Friday, more than 70 US scholars issued an open letter urging the leaders to use political capital wisely, and not to deflect blame and demonize certain people on virological origins. Similar voices of “leaving the scientific question to scientists” were ignored by  the Trump administration, and some US media fabricated the virus origin conspiracy theories to blame the pandemic on China.

Li noted that at the center of the pandemic response in the US was politics, not science and facts, or saving lives. Blame-shifting (on China and WHO), ignoring and distorting voices from the scientific community are all in accordance with such logic, he said.

Behind the politics, ordinary people suffer the most, losing jobs and loved ones and their lives, and Americans are torn apart, Li said.

Scholars urge U.S., China to work together against COVID-19

FDA approves emergency use of remdesivir for COVID-19 patients

3 Fitness goals you need to ditch immediately, according to a pro

Opinion: The real antidote to epidemic is not segregation, but rather cooperation