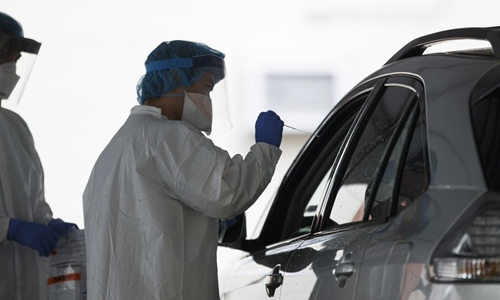 A medical worker uses a swab to take a sample at a COVID-19 drive-thru testing site in Washington D.C., the United States, on April 28, 2020. (Photo by Ting Shen/Xinhua)

Belleville Mayor Michael Melham has tested positive for COVID-19 antibodies and believes he contracted the virus in November, over one month before China first reported its initial cases, according to US media.

Melham said he was sick in late November after he attended the New Jersey League of Municipalities Conference in Atlantic City, suffering from symptoms such as chills, hallucinations and a “skyrocketing temperature,” NorthJersey.com reported on April 30.

“It felt as if I was an addict going through withdrawal,” said Melham in a news release, according to the website. “I didn’t know what was happening to me. I never felt that I could be so sick.”

In a text message to the U.S. news outlet, the mayor said it was “the sickest” he had been in his adult life.

The doctor assumed that Melham had the flu, saying he would recover after rest and fluids, according to the release.

Some health experts think that COVID-19 “may have been quietly circulating” in January and February in the United States, with no one previously putting the timeline back to November.

The mayor said he later suspected that he had contracted the virus but ignored it as “the earliest cases in the United States weren’t reported until January.”

The United States, now the global epicenter of the pandemic, reported its first case on Jan. 21. Melham said his illness in November prompted him to ask his doctor for a blood test, and he got the result on Wednesday, according to the release.

Melham insisted that it was “highly, highly unlikely” that he was exposed to the coronavirus later.

Settlement reached in death of football player in Kansas