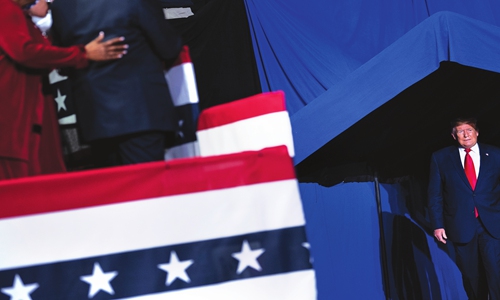 US President Donald Trump arrives to speak at a rally at Bojangles Coliseum on Tuesday, in Charlotte, North Carolina. The US has so far reported 100 cases nationwide and at least six deaths. Photo: AFP

US officials, led by President Donald Trump, have in recent days again retched up their attack on China over the origin of the coronavirus pandemic, claiming without any shred of evidence that the virus has originated from a lab in the Chinese city of Wuhan. As many in China and across the world have rightly noted, this is yet another attempt by Trump and his blind loyalists to shift blame to China for their utter failure in stopping the virus from killing tens of thousands of US citizens and sickening over a million more.

However, that’s hardly the single reason behind Washington’s latest campaign against Beijing because the shocking reality is that these officials evidently lack any sense of responsibility or shame in the first place that they feel the urge to start such a campaign to clear their names.

Another more plausible motivation for Trump and other US officials, including Secretary of State Mike Pompeo, is saving their jobs in the upcoming presidential election. Trump’s biggest and only selling point for his reelection campaign is his perceived toughness over trade with China and the recent attacks are likely just an attempt to gain leverage in negotiations for a phase two trade agreement.

Trump has already made that clear.  In an interview with Reuters last week, Trump pointed to his trade war with China to argue that he would be a better president than his Democratic opponent Joe Biden. To prove his toughness, Trump even threatened new tariffs on China as a punishment for what he argued as China’s inability to contain the virus fast enough. Important background of that interview was, as Reuters reported, that polls had shown Trump was losing a potential matchup against Biden.

What Trump perceives as his biggest selling point could be an effective countermeasure for China to strike back at his groundless yet popular attacks on China over the COVID-19 pandemic. China has been firmly pushing back the outrageous accusations from US politicians, but if Trump and his deputies do not stop, China could announce an indefinite delay in starting phase two negotiations with Trump.

That makes sense in several aspects. First, the top priority for both China and the US should be dealing with the COVID-19 pandemic and its economic fallout. Second, there is still huge uncertainty surrounding Trump’s reelection. Signing a trade deal with a US president who might be out of office in early next year would be a waste of time and energy. Third, with arguably the worst COVID-19 outbreak in the world, the US economy needs a trade deal more than the Chinese economy, which is already on a steady path to recovery. The time is firmly on China’s side. Lastly, the focus should be implementation of the phase one trade deal.

Above all, that would rid the US president of any hope to gain leverage for the phase two negotiations by launching vicious attacks on China with bogus claims and accusations over the coronavirus. It would be another unmistakable signal for Washington that Beijing would not back down on core issues in trade negotiations whatever Trump or any other US official says or does.

As Trump noted even before winning the election in 2016 that he could “shoot somebody and I wouldn’t lose any voters,” he will unlikely be held responsible for his gross mishandling of the COVID-19. That is beyond the imagination of any reasonable person. However, that is entirely a domestic matter for the US.

But If Trump and other US politicians are seeking to scapegoating China and hurt China’s national interests, China should also take necessary, proportionate measures to make the US economy pay.

Contrary to what Trump claims, China holds the most chips in trade. Shelving phase two talks would further add pressure on Wall Street as well as US businesses and consumers who continue to face hefty tariffs. Scrapping the phase one trade agreement would deal serious blows to US farmers and businesses.

China firmly opposes US support for Taiwan’s participation in UN