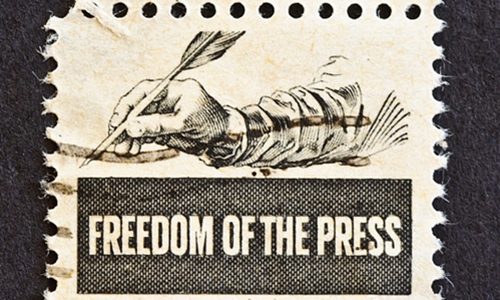 US Democratic representative James McGovern and US senator Marco Rubio, the chair and co-chair of the Congressional-Executive Commission on China, sent a letter to US President Donald Trump on Friday to express concern about the so-called press controls in China.

However, the duo made a serious mistake in talking about China instead of the US.

First, the letter called for the release of “unjustly imprisoned journalists, bloggers, and free speech advocates” including Ilham Tohti who was sentenced to life in prison for separatism in 2014. Again, the US politicians want to make these separatists look like “heroes” who would sacrifice everything for “democracy,” and they are trying to label China as the antithesis of freedom of speech and seize every chance to discredit the Chinese system. Be it in Hong Kong or in Northwest China’s Xinjiang Uygur Autonomous Region, shaping villains into heroes is a typical dirty trick of Washington’s in China-US disputes.

The letter also requests Trump to employ “all available diplomatic options” to reinstate the New York Times, Wall Street Journal (WSJ) and Washington Post journalists expelled from China in March, saying that the “free flow of uncensored news and information must be a prerequisite” of China-US relations moving forward.

This is also ridiculous, or even absurd. The US should not forget that the WSJ’s infamous and racist headline triggered the latest China-US media war. The WSJ still has not apologized or changed the headline yet, despite all the criticism from China and elsewhere in the world. What’s worse, instead of apologizing, the US even escalated the dispute by imposing a personnel cap on the number of Chinese citizens permitted to work in the US for five Chinese state-run media outlets. China was left with no other options but to act tit-for-tat. China’s reply is completely justified. As Washington started it first, it should “reinstate” the Chinese journalists first.

When it comes to freedom of press, does the US really have such a thing? In the US, different media speak for different political parties or different tycoons, and capital plays a huge role behind media. In terms of the COVID-19 epidemic, the White House tightened control of COVID-19 messaging in February and US Vice President Mike Pence controlled all related messaging from health officials. When four US senators learned about the threat of the COVID-19 in a January briefing, they chose to sell their stocks instead of releasing the information to the media and the American people. Now, does the US have press freedom? No, we do not think so.

The US has always bragged about its “press freedom” or “freedom of speech,” calling itself a “champion of democracy.” But sometimes, and in some cases, the so-called freedom has not benefited the individual, but brought only anti-intellectualism to the most powerful country in the world. For example, Trump, a politician rather than a scientist or a medical expert, has publicly suggested injecting disinfectant into the human body to kill the coronavirus.

Surprisingly, many Americans have believed his words of stupidity and absurdity. Such freedom to speak at random has brought about ridiculous consequences for the country. For example, as scientists around the world are calling for social distancing and self-quarantine, some US people gathered to protest these methods, yelling “freedom” and saying “they have no right.” It is strange that such a scene is taking place in the 21st century in the US, a country with the most advanced scientific research and technology worldwide. The anti-intellectualism and anti-scientism brought by the “freedom of speech,” or the freedom of spreading ignorance everywhere, may eventually ruin the country.

And what has happened to those who have made efforts to reveal the truth in the US? Brett Crozier, former captain of the USS Theodore Roosevelt, was dismissed after he urged protection for his navy crew members. In mid-April, a 16-year-old student, Amyiah Cohoon, was asked to remove her social media posts about her experience with the virus. She was told that her messages may cause distress and panic. These facts reflect typical US-style double standard and hypocrisy. If this happened in China, the US would have called it “press controls.” But in the US, they call it “methods to avoid panic.” This is way too absurd and shameless.

Indeed, as the letter reads, press freedom is “essential for thwarting global pandemics” under current circumstances. But considering all the above-mentioned facts, some US politicians had better keep their mouth shut and focus on their domestic COVID-19 fight. The US is not in a position, and not qualified as well, to judge China’s press freedom or freedom of speech in this regard.

Birth of coronavirus still a mystery, blame game needs to be averted