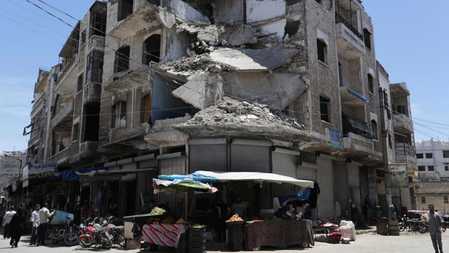 People walk past a damaged building in the city of Idlib, May 25, 2019. /Reuters Photo

Russian-backed Syrian troops have encircled a Turkish observation post as they approach the city of Maarat al-Numan in an offensive into the last significant rebel pocket of Syria, sources on both sides said on Tuesday.

It is the first major bout of fighting since the leaders of Turkey, Russia and Iran agreed in Ankara in September to “de-escalate” conflict in the northwestern province of Idlib after a months-long campaign that forced at least 500,000 civilians to flee. With diplomacy on a Syria peace settlement stalled, the de-escalation deal has been unraveling of late.

The sources said the Turkish military outpost, near the village of Surman and the main rebel-held highway that extends to the northern, government-controlled city of Aleppo, and eventually the capital Damascus further south, was now surrounded by Syrian forces, aided by Iranian-backed militias.

Turkey has 12 outposts in Idlib under a security arrangement struck with Russia and Iran in 2017. There have been several shooting attacks on the outposts since then, prompting Turkish retaliation, but Russian pressure on Damascus halted firing by Assad’s forces.

As government forces have thrust into the southeast of Idlib over the past two weeks, thousands of people have fled Maarat al-Numan, a major city that has been a refuge for families who fled other areas of Syria recaptured by Damascus earlier in the civil war since early 2011.

A Russian-led aerial bombing campaign has helped Syrian government forces close in on the strategic city, a major factor in the flight of civilians further north closer to the border with Turkey.

Settlement reached in death of football player in Kansas