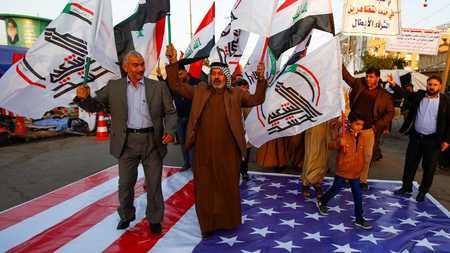 The U.S. military carried out air strikes on Sunday against the Kataib Hezbollah militia in response to the killing of a U.S. civilian contractor in a rocket attack on an Iraqi military base, officials said.

At least 25 militia fighters were killed and 55 wounded.

Iraq’s government denounced the strikes and warned they could affect ties with Washington.

“American forces acted on their political priorities, not those of the Iraqis,” a statement said, adding that such strikes “violate the sovereignty of Iraq.” The attacks “force Iraq to review its relations and its security, political and legal framework to protect its sovereignty,” the government added.

“The prime minister described the American attack on the Iraqi armed forces as an unacceptable vicious assault that will have dangerous consequences.”

Iraq’s National Security Council said the attacks are not based on evidence but a result of rising tension between Washington and Tehran, and Iraq rejects being a battlefield for a regional or international conflict.

Iraq’s Foreign Ministry said it would summon the U.S. ambassador in Baghdad to voice Baghdad’s disapproval.

Tensions have risen between Iran and the United States – Iraq’s two main allies – since last year when President Donald Trump pulled out of world powers’ 2015 nuclear deal with Tehran and reimposed sanctions on Iran.

U.S. Secretary of State Mike Pompeo said in a call with UN Secretary-General Antonio Guterres that the U.S. strikes “were aimed at deterring Iran,” the State Department said.

Earlier this month, Pompeo blamed Iranian-backed forces – which helped Baghdad turn the tables on ISIL and are integrated into the Iraqi security apparatus – for attacks on U.S. bases in Iraq. He said any attacks by Tehran or proxies harming Americans or allies would be “answered with a decisive U.S. response.”

“After so many attacks it was important for the president to direct our armed forces to respond in a way that the Iranian regime will understand,” U.S. special representative for Iran Brian Hook said in a news briefing.

Iran denies involvement in attacks on U.S. forces and has condemned the air raids as “terrorism.”

The strikes come as thousands take to the streets in Iraq to condemn, among other things, militias such as Kataib Hezbollah and their Iranian patrons that support Abdul Mahdi’s government.

About 400 people in Basra protested against the air strikes, demonstrating in support of the militias.

The raids brought threats of reprisal. “Our response will be very tough on the American forces in Iraq,” militia commander Jamal Jaafar Ibrahimi, also known as Abu Mahdi al-Mohandes, said on Sunday.

Mohandes is a senior commander of the Popular Mobilization Forces (PMF), an umbrella grouping of paramilitary organizations mostly consisting of Iranian-backed Shiite Muslim militias that were integrated into Iraq’s armed forces.

He is also one of Iran’s most powerful allies in Iraq and formerly headed Kataib Hezbollah, which he founded. His threat was met positively by his Iranian backers.

The PMF bolstered Iraq’s security forces during their battle to retake a third of the country from Islamic State insurgents.

The Iraqi government is in control of the militias in “95 percent of cases,” Abdul Mahdi said at a televised Cabinet meeting.

He said was told about the air strikes hours before in a phone call with U.S. Defense Secretary Mark Esper and tried to warn the militia.

U.S. military officials, speaking to Reuters on the condition of anonymity, said they had little doubt the militia group would respond in some way which could lead to a new spike in tensions between the U.S. and Iran.

“I think that they will retaliate,” one military official said, referring to Kataib Hezbollah.

Another military official said that there was concern that the events over the past week could lead to a cycle of retaliation.

Abdul Mahdi told his minister that the current caretaking government cannot do much and has to take its lead from parliament.

Iraq’s Fatih alliance, a political bloc representing the militias that holds the second largest number of seats in parliament, condemned the air strikes.

An ambulance transports the wounded members of Hashd al-Shaabi after an air strike on their headquarters in Qaim, Iraq, December 29, 2019. /Reuters Photo

Their main rival, populist cleric Moqtada al-Sadr, who leads parliament’s largest grouping, said he was willing to work with them to end the U.S. military presence in Iraq. But he also called on them to reign in their militias so as not to provide an excuse for further U.S. attacks.

He urged Iraqi authorities to prevent such attacks and “ensure Iraq does not become a field for settling regional and international scores and that others do not interfere in its internal affairs”.

Abdul Mahdi said his government’s policy was to keep Iraq out of regional alliances and away from war.

Israeli Prime Minister Benjamin Netanyahu’s office said he congratulated Pompeo “on the important operation by the United States against Iran and its proxies in the region”.

Russia said the strikes were unacceptable and counterproductive. The Syrian government also denounced the air strikes.

(With input from Reuters, AFP)

(Cover: Iraqi people walk on a U.S. flag in a protest after an air strike at the headquarters of Kataib Hezbollah militia group in Qaim, Najaf, Iraq, December 30, 2019. /Reuters Photo)