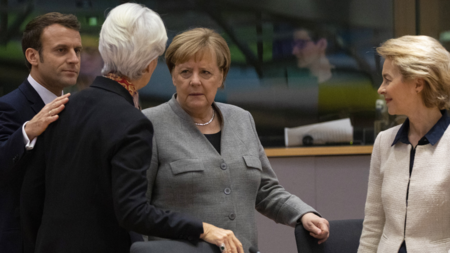 European leaders have called on all parties to de-escalate tensions after a US airstrike killed Iran’s chief military commander, Qassem Soleimani, the head of the Revolutionary Guard’s elite Quds Force, near Baghdad early on Friday morning.

During a telephone conversation with Russian President Vladimir Putin, French President Emmanuel Macron “called on all the parties to act with restraint,” according to the Elysee, adding that there should be no “new dangerous escalation of tensions.”

The Russian leader, in turn, told Macron that Soleimani’s assassination “can seriously aggravate the situation in the region,” the Kremlin confirmed, as the further breakdown in relations between the US and Iran risks embroiling the two nations’ respective allies in what is already a far-reaching confrontation.

Berlin also urged restraint, with German Chancellor Angel Merkel’s spokesperson Ulrike Demmer stating: “We are at a dangerous point of escalation. It is now important through prudence and restraint to contribute to de-escalation.”

She added: “We, too, view Iran’s activities in the region with great concern,” but stated that the stand-off should be resolved through “diplomatic paths.” Merkel said: “It is particularly important to prevent Iran from being dragged deeper into a conflict, because everyone has an interest in the continuing battle against IS.”

Speaking from Brussels several hours after the airstrike, European Council President Charles Michel sidestepped directly discussing Soleimani’s death, but said that “the cycle of violence, provocations and retaliations which we have witnessed in Iraq over the past few weeks has to stop.”

He added that “further escalation must be avoided at all cost.”

Britain’s foreign minister, Dominic Raab, put forward a similar message from London, stating that, while the Conservative government had “always recognized the aggressive threat” of Soleimani and the Quds Force, “We urge all parties to de-escalate. Further conflict is in none of our interests.”

UK Prime Minister Boris Johnson is set to meet with European Commission President Ursula von der Leyen next Wednesday, when the two leaders are expected to discuss the US strike in Baghdad, alongside the UK’s planned exit from the EU.

US President Donald Trump gave the order to US military commanders and said the strike was a ‘decisive defensive action to protect US personnel abroad.’ (Credit: AP)

Major General Qassem Soleimani was killed during a US airstrike on a convoy transporting him from Baghdad’s international airport on Friday morning. US President Donald Trump gave the order to US military commanders, saying that the assassination of Iran’s most recognizable military commander was a “decisive defensive action to protect US personnel abroad.”

The relationship between Washington and Tehran has dramatically deteriorated following Trump’s decision to pull out of a nuclear deal with Iran in 2018 and reintroduce sanctions against the Islamic Republic.

Tensions were further inflamed on Tuesday this week when a group of protesters attacked the US embassy in Baghdad after a US airstrike killed 25 fighters from an Iran-backed Iraqi faction of Hezbollah. That was itself a response to a rocket attack several days prior that caused the death of an American on Iraqi soil.

Trump accused Iran over both the rocket attack and the embassy demonstration, saying: “They will pay a very big price. This is not a warning, it is a threat.”

“The assassination of an Iraqi military commander in an official post is an aggression against the country of Iraq, its state, its government and its people,” he added, calling the strike  a “flagrant violation of the conditions authorizing the presence of US troops” inside Iraqi territory.

“America should know that its criminal attack on General Soleimani has been the country’s biggest mistake in west Asia, and America will not avoid the consequences of this wrong calculation easily.”

How to End International Tax Competition