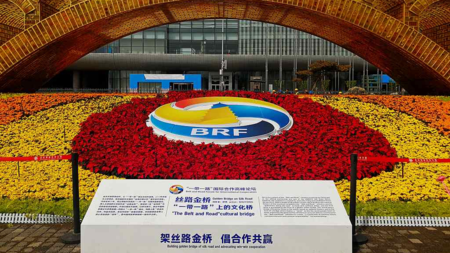 Editor’s note: Paul Antonopoulos is managing editor of Fort Russ News, director of the newly-established Center for Research on Multipolarity and a research fellow at the Center for Syncretic Studies. The article reflects the author’s opinions, and not necessarily the views of CGTN.

Syrian President Bashar al-Assad in an interview with Chinese media, Phoenix Television, on Monday announced that Syria was secure enough to be ready to join the Belt and Road Initiative (BRI), a prospect that will rapidly transform the destroyed country and put it on the path of recovery after nearly a decade of war.

Assad explained in the interview that “there are mutual interests, it is beneficial to China, Syria and all the countries on this Road.” Although the advantages of the Syria participating BRI are obvious – reconstruction – what advantage does China get from connecting the Arab country with its economic and transportation network?

Syria is strategically placed at the crossroads of oil and gas pipelines that connect resource fields in the Arabian Peninsula, the Persian Gulf and Iran with European markets, and on a wider scale is located on the crossroads between Africa, Europe, the Caucasus and Central Asia.

Assad identified the strategic position of Syria as a hub for pipelines as early as 2009 when he unveiled a “Four Seas” policy that hoped to create a unified economic bloc between Syria, Iraq, Turkey and Iran, thereby linking the Mediterranean Sea, Caspian Sea, Black Sea and Persian Gulf into one economic bloc.

However, the establishment of a successful economic nexus between these states would threaten the U.S. hegemonic plan for the region, a motivating factor for its backing of anti-government extremists when the Syrian War broke out in 2011.

China has consistently supported Syria diplomatically and economically during this difficult war and now that the reconstruction process is about to begin, Assad revealed that several Chinese companies are ready to participate but are afraid of a possible negative effect of the sanctions.

According to Assad, certain formulas have been found to circumvent U.S. sanctions imposed on Syria, which will allow foreign companies to do business in Syria. Although Syria has already proposed six infrastructural projects to China that could become part of the BRI, as Assad revealed in the interview, Syria is waiting for the Chinese government to determine which projects are in line with their thinking.

Adding Syria into the BRI means that China can now strategically place itself to rejuvenate the “Four Seas” initiative and allow further connection of trade and transportation networks with Turkey, Lebanon, Iraq, Iran and Jordan, while having easier access to the oil rich Arabian Peninsula, and promote stability and cooperation between these competing countries. Most of the oil produced in the Middle East is destined for East Asia, effectively meaning China has a strong interest to promote stability in the region.

China Harbor Engineering Company has been significantly investing into the port since 2012. This now allows China to connect the Eastern Mediterranean region with the BRI. To connect with the Lebanese port, China plans to build a railway line between Tripoli and the Syrian city of Homs, a corridor that Beijing needs to reduce transportation times and avoid having to transit the Suez Canal.

This is in addition the National Petroleum Corporation of China (CNPC) becoming the shareholder of two of Syria’s largest oil companies: the Syrian Oil Company and Al-Furat Petroleum. Beyond the economic issue, Beijing has invested in social projects in Syria such as the delivery of 800 electric transformers and has even trained the Syrian national basketball team in Beijing.

Although Syria has not formally joined the BRI, initiatives to integrate Syria into the network is already beginning. As the war has entered its final phase, Chinese investments and interests will only increase as Syria, an important center on the historic Silk Road, is strategically placed to further connect the BRI with the region and is also a hub for energy transportation, something of great interest to China.

For Syria and its approximately 260 billion U.S. dollars it needs for reconstruction, it will rely on its Iranian and Russian friends, but most importantly, on China. Syria effectively needs the BRI for recovery just as much as the BRI needs Syria to connect with the region.

Iraq protests U.S. airstrikes on militia groups in its territory