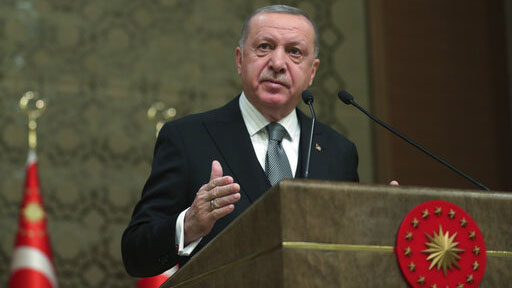 At an extraordinary parliamentary session in Ankara, Turkey’s parliament approved the bill by a margin of 325 votes to 184 (Credit: AP)

Turkey’s parliament has passed a bill allowing the nation’s troops to be deployed in Libya to support the UN-backed government in Tripoli.

It comes despite condemnation from Turkey’s main opposition parties and wider regional concern that Turkish military engagement could further destabilize the Libyan conflict, which is now in its eighth year.

The vote to grant a one-year troop deployment was passed at an extraordinary parliamentary session in Ankara by a margin of 325 votes to 184, with the AKP government of President Recep Tayyip Erdogan using its overall parliamentary majority to push through the bill.

The recent rebel offensive in Libya under General Khalifa Haftar is seeking to oust the Government of National Accord (GNA). Fighting has escalated in recent weeks after Russia-backed Haftar called for a “final” battle against troops loyal to Prime Minister Fayez al-Sarraj.

Last month, the Turkish parliament approved a security and military cooperation deal with Tripoli, paving the way for intervention.

No details have yet been released about the size and nature of the Turkish deployment, which the AKP claims is necessary to safeguard Turkey’s interests.

Egypt has called on the international community to make an urgent coordinated response, warning Turkey’s actions will “negatively affect the stability of the Mediterranean.”

The bill’s approval comes as Israeli, Greek and Cypriot leaders signed a new $6 billion deal for a pipeline carrying natural gas from the Eastern Mediterranean to European markets, which has caused friction between Turkey and Cyprus.

In Turkey, the news has been welcomed in nationalist circles. Libya (Tripolitania) was the last of the Ottoman territories to be lost to the empire in the Italo-Turkish war of 1911-12. In addition to strategic benefits, politicians from the Nationalist Movement Party (MHP), the junior coalition partner in the AKP administration, have invoked rhetoric of the so called “Mavi Vatan” (Blue Motherland) to justify Turkey’s historical territorial claims to the waters.

Analysts also stressed the need to see Turkey’s actions in light of events in Syria. A victory by the Russia-backed forces of President Assad will likely deliver Moscow full control of the port of Tartus on its eastern coast, where it already has its sole overseas naval base and where it has announced a $500 million investment.

Russia has supported the opposition forces of Haftar in Libya. Despite increasing cooperation between Ankara and Moscow on issues, such as Turkey’s purchase of Russia’s new s-400 missile defense system, Turkish troops on the ground in Libya risk a confrontation with Russia-backed forces similar to that currently being witnessed in Idlib.

Ankara and Tripoli both backed Egypt’s Islamist government led by Mohamed Morsi, which was ousted by the military in 2013 in a coup that Erdogan called “a killer of democracy and the future.”

Regent’s University’s Mekelberg warned that Erdogan, who has been under increasing pressure domestically since the loss of the Istanbul mayoral election last June, may seek to use the Libya campaign to appeal to the AKP’s pious religious base.

“He is using Islamism to promote populism in Turkey. But when he starts to encounter the Al Qaeda and ISIS-style Islamism in Libya, he will find it is a completely different ball game,” Mekelberg said.

Will Boris Johnson keep promise to leave EU on October 31?

The tragedy of a western-led intervention: How Libya became hell on earth