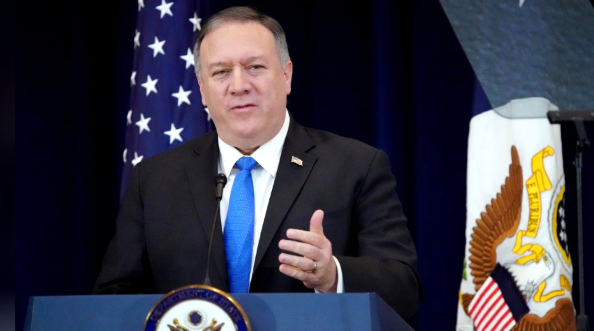 A U.S. airstrike in Baghdad that killed a top Iranian commander aimed to disrupt an “imminent attack” that would have endangered Americans in the Middle East, U.S. Secretary of State Mike Pompeo said in television interviews on Friday.

Decoding the U.S. policy of ‘maximum pressure’ against Iran

Pompeo, in interviews on Fox News and CNN, declined to discuss many details of the alleged threat but said it was “an intelligence-based assessment” that drove the U.S. decision to target Qasem Soleimani, the commander of Iran’s elite Quds Force.

A man prays next to a picture of late Iranian commander Qasem Soleimani inside a mosque in Ghazieh, south of Lebanon, January 3, 2020. /Reuters Photo

“He was actively plotting in the region to take actions – a big action as he described it – that would have put dozens if not hundreds of American lives at risk. We know it was imminent,” Pompeo told CNN.

“These were threats that were located in the region,” Pompeo added. “Last night was the time that we needed to strike to make sure that this imminent attack… was disrupted.”

Iran has threatened to retaliate after the overnight U.S. airstrike against the second most powerful figure in Iran, which marked a dramatic escalation in the Iran-U.S. conflict in the Middle East.

Pompeo said the United States remains committed to de-escalation with Iran but will defend itself. He added that the United States has fortified its assets in the region and is prepared for any possible retaliation, including a cyberattack.

He added that he could only confirm that Soleimani had been killed in the strike.