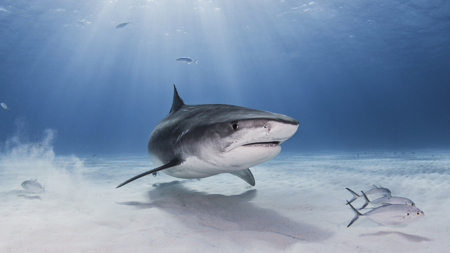 Sharks, the sea’s top predators for millions of years, are at risk of disappearing from the Mediterranean as overfishing and plastic pollution choke populations of the endangered hunters, conservationists warned Friday.

The World Wildlife Fund (WWF) said that more than half of shark and ray species in the Mediterranean were under threat, and that almost a third of them have been fished to the brink of extinction.

Its report, released ahead of Shark Awareness Day, singled out Libya and Tunisia as the worst culprits, with each country’s fishery hauling in about 4,200 tonnes of sharks a year, three times that of the next biggest Mediterranean fisher, Italy.

While some species are targeted for food, many of the sharks fished in the Mediterranean are bycatch caught up in nets set for other fish.

The WWF said it had recorded more than 60 shark species entangled in fishing nets across the Mediterranean.

Catshark is a small shark that lives in the seabed of the Mediterranean Sea. /VCG Photo

In addition, the explosion of plastic pollution is endangering shark populations, either through the animals ingesting or becoming enmeshed in refuse items.

Sharks have been around for more than 400 million years and are particularly vulnerable to population decline due to their slow maturation and long gestation periods.

WWF said a lack of international cooperation and regulation meant it was nearly impossible to actively monitor shark conservation efforts.

But an even bigger problem could be difficulty in tracking sea-based populations; the IUCN says it currently lacks sufficient data on nearly 200 shark species to make a classification.

“Sharks are at risk of disappearing from the Mediterranean,” said Giuseppe Di Carlo, director of the WWF’s Mediterranean Marine Initiative.

“Their rapid decline is the most serious signal of the status of our sea and of irresponsible fishing practices.

“All Mediterranean countries are responsible for this. Sharks have been part of our sea and culture for thousands of years, we need to act quickly to ensure they remain in the future,” Di Carlo added.

(If you want to contribute and have specific expertise, please contact us at lee@hayom.com)