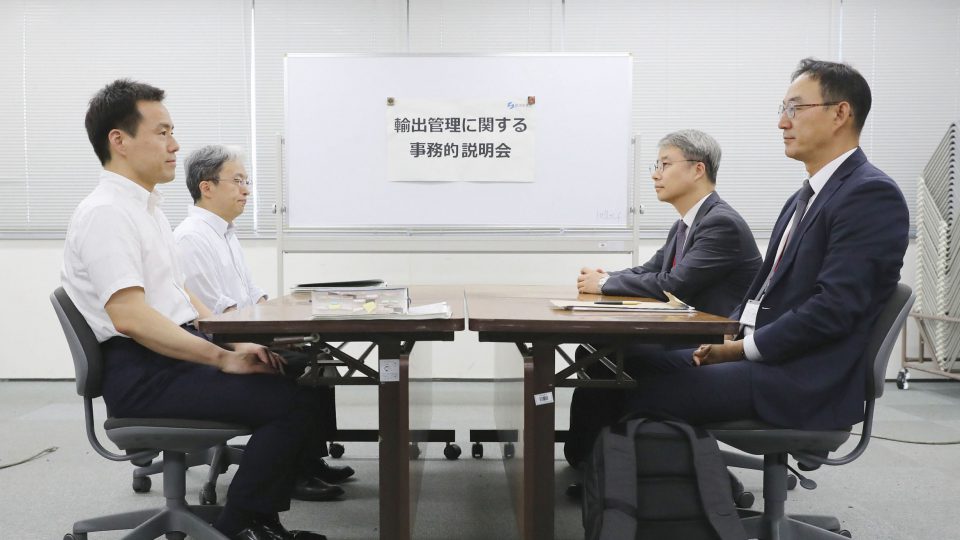 A row between Japan and South Korea escalated on Saturday, with contested accounts of a frosty working-level meeting the day before that had failed to make progress on a dispute that could threaten global supplies of microchips and smartphone displays.

Tokyo lodged a protest against Seoul, saying it had broken an agreement on what the two sides would disclose from the Friday discussions on Japan’s curbs of exports to South Korea of some materials used to make high-tech equipment, said Japanese trade ministry official Jun Iwamatsu.

Japan’s Ministry of Economy, Trade and Industry (METI) also disputed a South Korean official’s statement that Seoul had asked Japan on Friday to withdraw the restrictions.

But a South Korean trade ministry official shot back that Seoul had “clearly demanded Japan withdraw its trade restrictions at yesterday’s meeting, and there should be no disagreement over that matter with Japan.”

He told Reuters the two sides had discussed what they would disclose but that there was no agreement.

“I am frustrated,” said the South Korean official, who declined to be named due to the sensitivity of the matter.

Japan recently tightened restrictions on the export of three materials used in high-tech equipment, citing what it has called “inadequate management” of sensitive items exported to South Korea, as well as a lack of consultations about export controls.

Japanese (L) and South Korean officials meet in Tokyo to discuss Japan’s new restrictions on high-tech exports to South Korea, which is the first meeting between the countries since the curbs took effect in the previous week, July 12, 2019. /Reuters Photo

But the dispute also appears to be rooted in a decades-old wartime disagreement. It comes amid deep frustration in Japan over what Tokyo sees as Seoul’s failure to act in response to a South Korean court ruling ordering a Japanese company to compensate former forced laborers from the Second World War.

In the Friday working-level talks, South Korean officials expressed regret over Japan’s export restrictions and asked Tokyo to remove them, participant Han Cheol-hee, a trade ministry director, told reporters as he was leaving Japan on Saturday.

In response, Iwamatsu, director of METI’s trade control policy division, told a hastily arranged news conference: “We’ve checked the record of the meeting… We found no clear comment asking for the withdrawal.”

Iwamatsu said the two sides had agreed on what they would disclose from the talks but that the South Korean official went beyond the agreement. “We believe this is something that affects our relationship of trust,” he said.

A truck drives between shipping containers at a container terminal at the port in Incheon, South Korea, May 26, 2016. /Reuters Photo

One reason for the sensitivity over characterizing the talks could be a Japanese fear that if South Korea can assert that it used consultations and unsuccessfully sought to have Tokyo withdraw the curbs, Seoul could justify escalating the matter to the World Trade Organization.

“The nature of the meeting is not a consultation, but an occasion where Japan gives explanation after getting a request from the South Korean government,” Iwamatsu said.

“Therefore we would like to correct an expression from a South Korean official that the meeting can appropriately be described as a consultation for problem solving.”

Friday’s talks began with two negotiators from each side facing off in stony silence in a small meeting room, without greeting each other and with the Japanese officials not standing or bowing when their South Korean counterparts entered.

A Japanese official later explained that the bureaucrats had earlier met and exchanged greetings. South Korean media, however, reported there was a “cold reception” for their officials, and that the meeting took place in a room that looked like a “garage”.

Thousands demonstrate in Sudan to mark 40 days since deadly crackdown