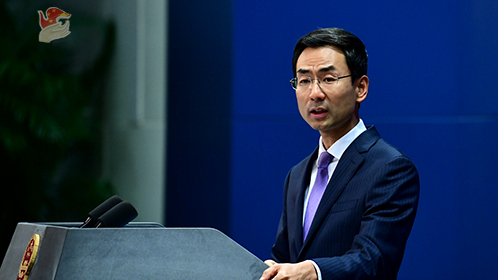 Editor’s note: The article is first published by China Plus on July 14, 2019.The article does not necessarily reflect the views of HAYOM.

The Chinese Foreign Ministry announced on July 12 that China will impose sanctions on U.S. companies involved in arms sales to Taiwan. The announcement came after the United States earlier announced a plan to sell weapons worth 2.22 billion U.S. dollars to Taiwan. The sanctions are a necessary and decisive action taken by a sovereign country to defend its core national interests.

Taiwan is an inalienable part of China. The arms sales undertaken by American companies are not simply business deals; the sales undermined China’s sovereignty and national security. China’s decision to impose sanctions on U.S. companies involved in the sales is reasonable and legitimate. The Chinese government and enterprises will never do business in any form with entities that harm China’s national interests.

Does the United States really want to help protect Taiwan’s security when it sells weapons to the region? Sadly not.

In the U.S, it is no secret that the government’s interest is deeply tied to that of groups of arms dealers. In selling outdated weapons to Taiwan at high prices, the U.S. not only tried to use the Taiwan question as leverage against China, but also treated Taiwan as a cash cow to fulfill the interests of its arms dealers.

Since the current administration came to power, the United States has even taken a step further, placing arms dealers directly at the negotiating table with weapons buyers. In April 2018, for example, the U.S. State Department allowed American companies to provide sensitive submarine technologies to the Taiwan authorities in the form of commercial sales, which is equivalent to authorizing U.S. military enterprises to negotiate directly with Taiwan.

U.S. arms sales to Taiwan are by no means simple commercial activities. China’s national sovereignty is inviolable and its internal affairs shall not be interfered with. The approval of arms sales to Taiwan will not only harm peace and stability across the Taiwan Strait, but will also damage cooperation in important areas between China and the United States. Any enterprise or individual that attempts to challenge China’s national sovereignty for its own interests will ultimately have to pay a heavy price for such short-sighted behavior.