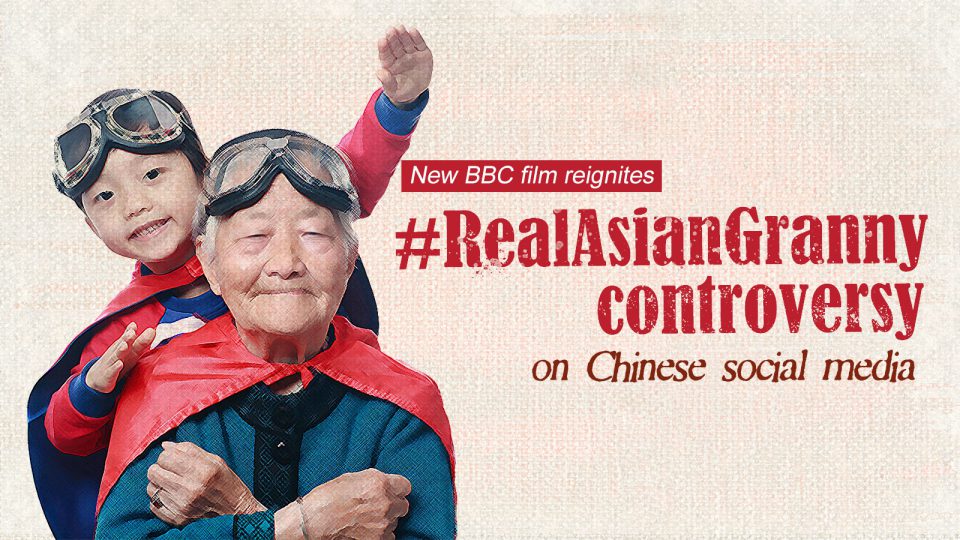 “This is a real-life Chinese granny, what our grandmas are like!” – Chinese netizens shared their fondest memories of their grandmas and posted heartwarming videos on Chinese social media to pay homage to the elders in their families.

This comes in response to CBBC’s – the BBC’s channel for children – upcoming sitcom “Living With the Lams,” which has already been accused of using “racist clichés.”

In February, CBBC was criticized for producing the 10-part sitcom, which depicts a restaurant owned by a British-Chinese family in Manchester. In it, the Chinese grandma character is reportedly racially stereotyped as she “spits on the floor and eats fortune cookies all day.”

A screenshot shows a recently released mini documentary by BBC Stories about “the people behind #RealAsianGranny” on BBC.com.

A recently released mini documentary by BBC Stories about “the people behind #RealAsianGranny” – a Twitter hashtag which originally surfaced as a protest to the show earlier in the year – resonated with Chinese netizens and reignited the controversy.

A post with a short video regarding the show with the purportedly racist character and the BBC Stories episode went viral on Weibo, Chinese Twitter-like social media platform, garnering more than 10.9 million views and about 38,000 likes within two days.

Screenshots show a post with a short video regarding the show with the purportedly racist character and the BBC Stories episode, as well as some of the comments on Weibo.

One of the most liked comments wrote: “You don’t really know our Chinese grannies but created such a character. It’s outrageous!”

‘Their love is the same,’ but they are not

“BBC accused of defaming Chinese grannies” soon became one of the hottest hashtags on Weibo and has over 230 million views to date.

Weibo users responded through the hashtag by sharing images of their grandmothers and posts with heartwarming stories about them.

A screenshot shows “BBC accused of defaming Chinese grannies” has over 230 million views to date, becoming one of the hottest hashtags on Weibo.

“She can’t speak English but she has considerable positive energy,” a comment read. “By sharing a taste of home, she sends a sense of belonging to tens of thousands of Chinese overseas students.”

“What era is it? Does racial discrimination still exist?” read another user’s post, with a short video featuring a 96-year-old grandmother from Urumqi, the regional capital of northwest China’s Xinjiang Uygur Autonomous Region, who embroiders every day. It concluded with, “This is how cute and diligent my Chinese granny is, and you should learn more about her!”

Some users shared a short feature called “Grandma.” It is a tear-jerking story about a little boy and his granny that went viral a while ago and touched many people. The post put emphasis on the line in the video that “Grandma’s love is reserved in simple and ordinary company.”

“My granny might be very different from yours,” a Weibo user wrote, adding, “but their love is the same in their distinct expressions.”

‘The strongest women we know’

A screenshot from the recently released video “The strongest women we know” features Elaine Chong (C), Asian reporter from BBC.

Earlier this year, the uproar over the CBBC’s planned series came as people, who have seen the original scripts, reportedly written by a non-Asian team, found that the show perpetuate racist stereotypes.

The controversy soon triggered the trending hashtag #RealAsianGranny on Twitter with many users then also recalling their memories of grandmas.

Elaine Chong, an Asian reporter for the BBC, then made a video in turn that was released by BBC Stories on June 22.

A screenshot shows the seven British Asians – the main community behind the viral hashtag – telling stories about their grandmothers in the BBC Stories video.

“These real Asian granny stories show us more than the stereotype. In fact these are the strongest women we know,” Chong stressed in the video.

Titled “The strongest women we know,” the episode features seven British Asians – the main community behind the viral hashtag – telling stories about their grandmothers.

“I just remember as a child we would always gravitate towards each other. I always remember feeling quite warm about it,” Tuyet recalled.

A screenshot features Tuyet, who is sharing her stories with her grandma in the the BBC Stories video.

“One of the things that struck me was that she was a lot cooler than my mum. I mean she actually smoked, and she drank martini on the rocks,” Jennifer shared, adding, “It totally bucks the kind of stereotypes about Chinese grandmothers as well.”

The video follows several key aspects, such as food, sharing, lessons, conversations, perseverance, affection, and legacy, to show a true image of Asian grandmas, and the special connection between these women and their grandchildren.

China to hit back against new U.S. visa rules for Chinese journalists