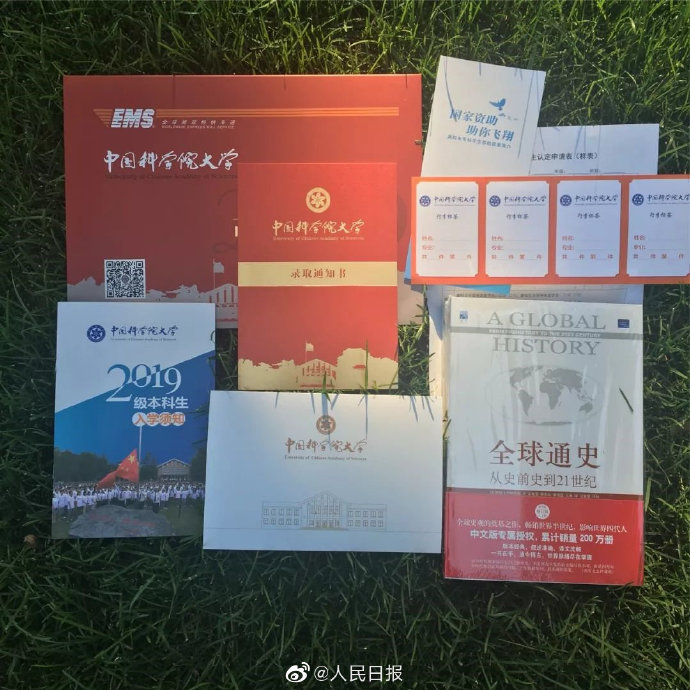 The letter of acceptance from the University of the Chinese Academy of Sciences. /Photo via Sina Weibo

One month after China’s college entrance examination took place, students are anxiously waiting for their letter of acceptance from their coveted universities.

Zou Honggang, a Beijing student, received his dream letter from the University of the Chinese Academy of Sciences. The moment he opened it, he was surprised.

In the letter that university president Li Shushen addressed to incoming freshmen was embedded a model of the Loongson chip, a product from the CPU series independently developed by the Chinese Academy of Sciences in 2001.

A model Loongson 3A chip embedded in the letter of acceptance from the University of the Chinese Academy of Sciences. /Photo via Sina Weibo

Loongson 1 was China’s first domestic high-end general-purpose CPU in 2002, and the Loongson 3A, the one embedded in the letter, was the country’s first quad-core CPU released in 2009. The Loongson CPUs have been applied to the Beidou satellite navigation system, China’s first cargo spacecraft “Tianzhou-1” and other high-tech projects. So far, there have been no operating errors.

“It looks small, but it can drive the vast world; it looks plain, but it is a reflection of self-motivated innovation and independent research and development of the Chinese Academy of Sciences,” Li wrote. “Hope you read more and see farther from this chip.”

The letter that president Li Shushen wrote to incoming freshmen of the University of the Chinese Academy of Sciences. /Photo via Sina Weibo

On Friday, the small chip sparked the enthusiasm of users on Sina Weibo, China’s equivalent of Twitter. It even became one of the top 10 most searched topics, with netizens calling it the most “hardcore” university admission notice.

Some praised it as “so cool,” while others felt proud and said they felt “the strength and responsibility even before stepping through the school gate.”

As of Saturday night, the topic has triggered 97 million views and was discussed 7,000 times.

A cartoon figure generated by AR technology pops up after scanning the QR code on the admission notice from Tianjin University. /Photo via Xinhua News Agency

Other universities also carefully designed their admission notices, and some even use technologies such as Augmented Reality and laser engraving.

Scanning the QR code on the admission notice from Tianjin University causes a cartoon figure generated by AR to pop up. The self-proclaimed first intelligent news anchor for Chinese universities, “Haixiaotang,” says hello to the viewer and introduces the university in a two-minute introduction.

Tsinghua University’s admission letter is like a pop-up book. Upon opening it, a micro 3D school gate will stand erect on the letter. More than 100 paper components depicting the school gate were engraved with lasers and put together by hand.

Similar to Tsinghua University, Shanghai Jiao Tong University issued its own “pop-up” admission letter but with herbal essential oils, giving off a heart-stirring fragrance to welcome its new students.

An admission letter from Peking University. /Photo via Sina Weibo

Highlighting the “Daxuetang” plaque, which used to hang on the entrance of the Imperial University of Peking founded in 1898, Peking University’s admission letter shows newcomers the school’s history as China’s first official university and the evergreen vitality of the old school.

Southeast University has also generated attention, as its admission letter is like a singing photo album – playing the school anthem upon being opened.

Beijing calls for scientific explanations for where COVID-19 originated