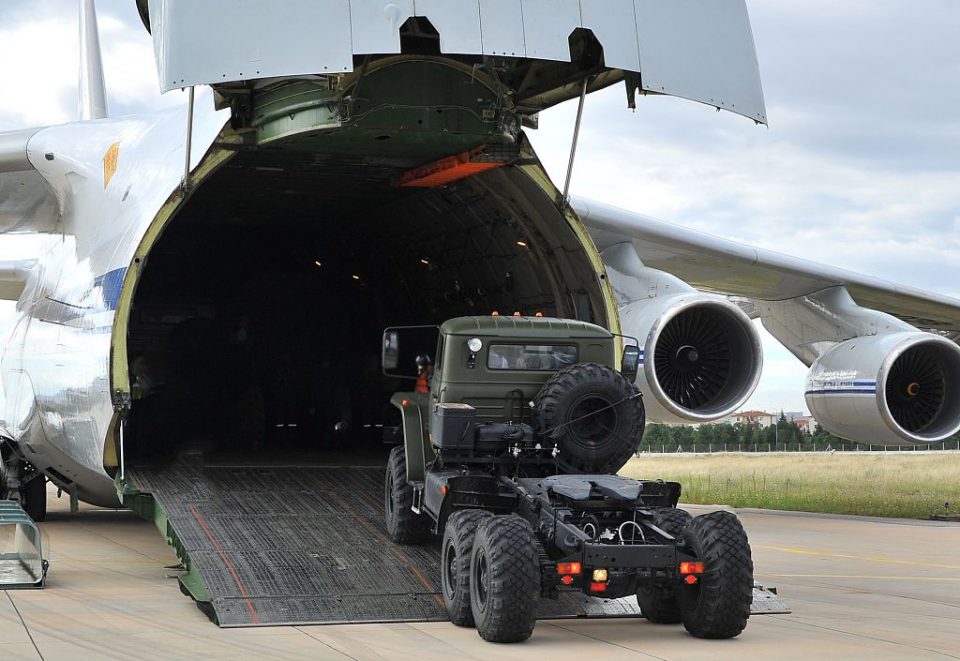 Turkey has taken the delivery of parts for the Russian S-400 missile defense system in a move that risks undermining the country’s NATO membership and could precipitate a new crisis in the value of the lira, analysts told CGTN .

The Turkish Defense Ministry has confirmed shipments for the S-400 have arrived at the Murted military base in Ankara, in defiance of the U.S., which had strongly opposed the move and threatened Turkey with sanctions.

“We maintain close coordination with Russia in respect to the beginning of S-400 deliveries…. There are no problems. The process will continue as it has to,” said Mevlut Cavusoglu, Turkey’s foreign minister.

Turkey now faces possible expulsion from the F-35 fighter jet program and a round of economic sanctions from the U.S.

The U.S. State Department had previously set a deadline of July 31 for Turkey to suspend the S-400 deal.

Washington claims the activation of the Russian missile system on Turkish soil would compromise the security of the F-35 project while warning of “very real and negative (economic) consequences” for Turkey through the enactment of the Countering America’s Adversaries Through Sanctions Act (CAATSA).

In early June, Turkish fighter pilots were removed from the F-35 training program at Arizona’s Luke Airbase, and the planned delivery of 116 fighter jets so far ordered by Turkey was put on hold.

However, after a meeting with U.S. President Donald Trump at the G20 summit in Osaka, Japan, Turkish President Recep Tayyip Erdogan appeared to strike a positive note, telling reporters Trump had made a statement clearing the sanction issue, and that “no such thing will happen.”

As for the F-35 program, Turkish defense contractors produce parts for the cockpit and landing gear used to build the stealth jet.

Fadi Hakura, manager of the Turkey Project at Chatham House, told CGTN that accepting the delivery of the S-400 is a gamble that may backfire.

“The leadership is laboring under a misconception that Turkey is crucial to the F-35 program, both in terms of its membership and its role in the production of components, but this is not really the case. In Washington, there is a near-complete bi-partisan consensus now, from both the Republicans and Democrats, in opposition to Turkey’s actions. There will be immense pressure for the Trump administration to act,” said Hakura.

Relations between America and Turkey have become strained in recent years over U.S. support for the Kurdish YPG fighters in northern Syria, which Turkey’s ruling AKP sees as an affiliate of the outlawed Kurdistan Workers Party (PKK) and Washington’s refusal to extradite the U.S.-based Muslim cleric Fethullah Gulen, whom Ankara blames for masterminding the failed coup attempt of July 2016.

The issue for Turkey now is what form the sanctions will be in and when they will be imposed. The 12 penalties spelled out in the CAATSA legislation range from a ban on export licenses to prohibiting access to U.S. loan and bond markets.

“There could be an immediate economic cost imposed on people involved in the matter: travel bans, asset freezes, etc. Also, companies involved in Turkey may suffer direct consequences. Turkey will be likely irreversibly excluded from the F-35 program, losing contracts and technology transfer … Turkish firms have invested lots of money to beef up production lines in preparation for building the F-35. This is a sunk cost that will not produce any return, (plus) additional costs for the treasury that may now have to look for alternative jets to upgrade its aging fleet,” said Maggio.

However, analysts say the 2.5-billion-U.S.-dollar purchase of the S-400 missile system reflects a new reality for Turkey.

The use of NATO F-16 falcon jets by rebel army officers in the 2016 failed coup alarmed the AKP government, while in Syria, Ankara finds itself in a shaky alliance with Moscow, which is backing forces loyal to President Assad. With ISIL now in retreat, the AKP is anxious to contain growing demands for Kurdish autonomy in the region.

Soner Cagaptay, director of the Turkish Program at the Washington Institute for Near East Policy, claims President Erdogan is now tied to the S-400 delivery.

“He knows that if he cancels the deal, (Russian President Vladimir) Putin would ask him to vacate Syria, and that would result in the creation of a statelet controlled in northern Syria run by the People’s Protection Units, the YPG, which is connected to the PKK. And Turkey’s sworn enemy would establish a state enveloping Turkey from the south for nearly four hundred miles,” Cagaptay explained.

Maggio claims currency markets have yet to react, telling CGTN their expectation is that the lira will enter another currency crisis like in August of last year, but it will be worse this time with USD/TRY up to 8.30 by the year’s end.

Aside from the economic impact, Fadi Hakura says the S-400 deal marks a profound change in policy direction for Ankara, with far-reaching consequences.

“Turkey has consciously chosen to pursue the deal with Russia at the expense of its traditional allegiances to NATO and the U.S., particularly in terms of its military allegiances. It is not inconceivable that its dogged determination to go ahead with the S-400 deal could lead to Turkey’s ejection from NATO in the not too distant future,” Maggio said.

US mayor says may have had COVID-19 last November