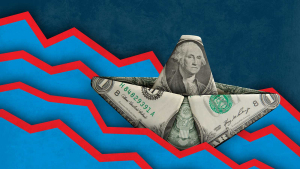 Most notable in the flood of media and diplomatic coverage of the global COVID-19 pandemic has been the rising belligerence of the Trump administration’s rhetoric vis-à-vis China. Unsurprisingly, many commentators point to the US administration’s efforts to ‘disguise’ its mismanagement of the COVID-19 crisis that former US president Obama has characterised as an “absolute chaotic disaster.” Other voices focus on the ‘election’ explanation that sees an increasingly desperate Trump attempting to reopen the economy in order to convince his ‘base’ that he is a ‘wartime’ leader conquering a ‘silent’ enemy and punishing its supposed source, China. However, a third deeper ‘convergence’ analysis points to both the ‘disguise’ and ‘election’ motivations and their connection to an unfolding series of severe structural shocks to the US economy.

1. The unprecedented plunge in global oil prices. The subsequent demand destruction and supply surplus exposed how high cost US shale oil, which employs millions of US citizens in its long supply chains, is only profitable when artificially high oil prices are maintained via disproportionally high Saudi output combined with crippling oil sanctions and political subversion activities against Iran, Libya, Russia and Venezuela.

2. The precipitous NYSE descent to pre-Trump levels and the continuing injection of trillions of dollars of stimulus directed largely to corporations and the purchase of bonds including ‘junk’ bonds. One critical consequence is the rapidly expanding ‘gap’ between the real economy and the stock market on the back of the unprecedented and continuing injections of liquidity since Trump was elected in 2016.

4. Historic unemployment numbers which have rocketed from the official 3% to over 15% in a mere eight weeks exposed the fragility of Donald Trump’s “best economy ever” hyperbole. One immediate effect is that US poverty levels could rise from 14.7% to reach 18.9%.

In China, however, financial markets and the Yuan have demonstrated remarkable stability. Of course, China was the first to be exposed to the devastating effects of COVID-19. Unlike the EU, US and Japan, it is emerging relatively quickly from its successful containment of the Coronavirus. China has been preparing for a major shock to its economy since president Xi Jinping referenced a ‘New Long March’ in 2019 referencing US bipartisan demonization of China and the Trump administration’s visceral pursuit of financial and technological impediments to China’s economic growth. Gradually, municipal and provincial authorities are opening social and retail activity and domestic travel, while Beijing is stimulating domestic consumer demand, deepening reform and opening up and supporting BRI partner projects and production capacities.

The upcoming Two Sessions will provide long-term guidance on the Chinese government’s continuing responses to the unprecedented 6.8% GDP decline of Q1 2020 and how China can leverage its status as the first major economy to emerge from the pandemic. Current stimulus packages are focused on supporting capital investment into future drivers of the economy such as 5G and IoT, tele-health, cashless economy and accelerating the transition of hundreds of SOE’s into mixed ownership. However, as the ongoing Phase 1 trade arrangements, Huawei fiasco, entity list expansion, journalist visa restrictions and other politically motivated trade and technology threats demonstrate, the Trump administration is not only becoming increasingly desperate in the lead up to the November 2020 presidential election, but also pursuing a decoupling of its economy from global supply chains in order to further prosecute its ‘whole of government’ strategy to reverse the ‘loss of China.’

Just how the increasingly volatile Trump administration balances a looming election, historic unemployment, a widening gap between the real economy and stock market highs, the deliberate weakening of multilateral organisations, military and political antagonism in the Gulf, Caribbean and Western Pacific and the critical need for cooperation with China on a ‘trade war’ victory, supply chain nationalism and a return to the ‘world’s best ever economy’ is unclear.

The fundamental political, economic and social structural flaws of the US, however, are clearly exacerbated by the Trump administration’s inept economic governance and diplomacy. Increasingly, it is the US economy that relies on China’s economic stability, wealth creation, manufacturing prowess and massive consumer market. In the face of the US response to the global COVID-19 pandemic, the lesson for the EU, ASEAN, Gulf countries, Africa and Latin America is clear; US debt financed domestic growth and the global economic volatility manifested in its unilateral and weaponised approach to global security, trade, financial markets, technology and science are the greatest threats to global prosperity and security.