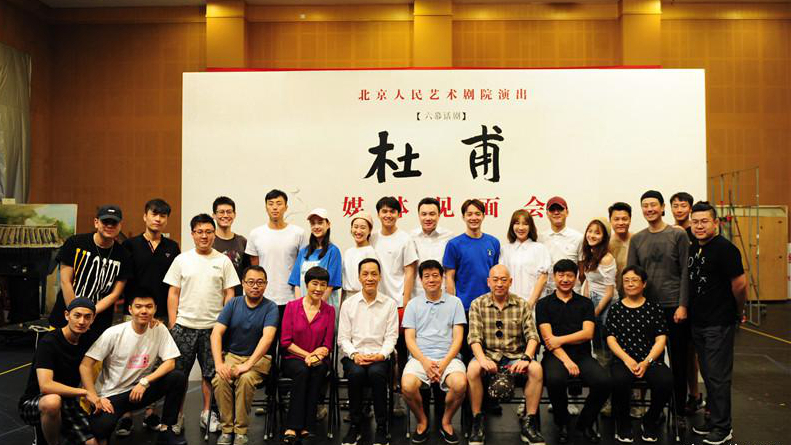 A press conference of new play “Du Fu” is held at the Beijing Capital Theater in Beijing, China, July 11, 2019. /Photo via bjry.com

Tang-Dynasty (AD 618 – 907) poet Du Fu will become the subject of a new theatrical drama, which is set to be staged at Beijing People’s Art Theater on August 9.

Masterful poet Du Fu is often regarded as the greatest of the Chinese poets, along with Li Bai.

As the prestigious Chinese theater’s first production this year, the new play “Du Fu” has drawn a lot attention since it began casting.

A press conference of this highly anticipated work was held Thursday in Beijing with all the strong cast in attendance.

The upcoming play is being directed and starring veteran Chinese actor Feng Yuanzheng.

Feng is by all means a familiar name for Chinese audiences as he has wowed viewers with passionate and persuasive performances over more than two decades.

And this time around, Feng is presenting his debut directorial work at Beijing People’s Art Theater, which brings both pressure and inspiration, according to the 56-year-old artist.

“I need to care about each detail, and it indeed consumed lots of energy,” said Feng.

Artists attend the press conference of new play “Du Fu” that is held at the Beijing Capital Theater in Beijing, China, July 11, 2019. /Photo via bjry.com

He noted that his creation will focus on not only the poet’s remarkable achievements but also his real personality and his noble spirit.

The play “Du Fu” will trace the hard and bitter life of the great poet, who will be portrayed in realistic and romantic ways throughout.

It is noteworthy that the play will be the second to feature a prominent Chinese poet in ancient times.

In 1991, Beijing People’s Art Theater staged the historical drama “Li Bai,” which has become a masterpiece of the theater and is now considered a classic for the stage.

What is lampshading? The leggy fashion trend, explained