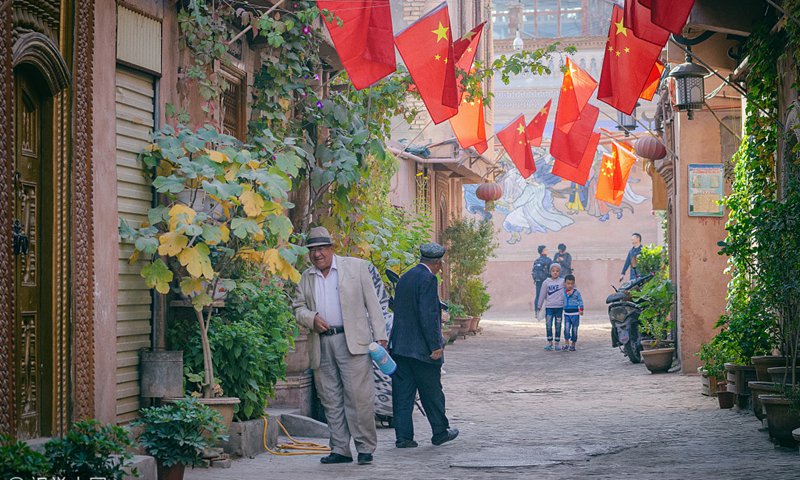 22 nations’ letter based on ‘groundless guesswork’

A media group from Indonesia and Malaysia talks to trainees in an education and vocational training center in Hotan, Northwest China’s Xinjiang Uyghur Autonomous Region in February. Photo: Liu Xin/GT

China issued on Thursday a stern response to countries which signed a joint letter to the UN criticizing China’s policies in Xinjiang Uyghur Autonomous Region, with observers saying their criticism is based on groundless guesswork and double standards on human rights issues would hinder the global counter-terrorism work.

Human Rights Watch released on Wednesday a joint letter signed by 22 countries at the UN’s top human rights body, urging China to “end its mass arbitrary detentions and related violations against Muslims in the Xinjiang region.”

Chinese Foreign Ministry Spokesperson Geng Shuang said at a press briefing on Thursday that China strongly opposes the 22 countries that politicize human rights issues and urges these countries to abandon their biases and cease interference in China’s domestic affairs on the pretext of Xinjiang-related issues.

Geng called the accusations a disregard for the truth and groundless slander and attacks on China, and noted that China has invited members of the Office of the United Nations High Commissioner for Human Rights to visit Xinjiang.

A source close to the Chinese delegation to the United Nationals Human Rights Council (UNHRC) told the Global Times that China is not the country under the Universal Periodic Review at the UN this time and the 22 countries may want to hype China’s Xinjiang policies by releasing the joint letter now.

China has invited many diplomats and foreign media reporters to Xinjiang and shown them the education and training centers, in the hope to help the international community get more information about what is really happening in Xinjiang, the source said.

“The 22 countries, all developed ones, cannot represent the whole world. Security and stability is necessary for people to enjoy their human rights and the view suits the interests of the majority of society,” Qian Jinyu, executive dean of the Human Rights Institution of Northwest University of Political Science and Law based in Shaanxi Province, told the Global Times.

“From this we can see that launching training centers is not ‘arbitrary detention’ of any ethnic group, but is aimed at helping those who need help to get rid of the influence of extremism and return to normal life,” Qian said.

Mijiti Mermoti, principal of an education and vocational training center in Kashi, said that the training center does not target any particular ethnic group or religion.

The Global Times reporter met Paher Tursun at a training center in Shule county in Xinjiang’s Hotan Prefecture. Tursun said that he is not a Muslim. He was sent to the center because out of curiosity, he watched some videos that spread extremism and shared them with his friends.

A trainee takes up painting at a training center in February. Photo: Liu Xin/GT

Focus on own threats

“These foreign envoys’ criticism of China’s Xinjiang policies is based on groundless guesswork and fake news spread by some Western media. The double standards held by some Western countries have become the biggest obstacles for the global counter-terrorism work,” Li Wei, a counter-terrorism expert at the China Institute of Contemporary International Relations in Beijing, told the Global Times on Thursday.

Recent terrorist attacks that happened in developed countries, including a gun rampage in New Zealand in March, in which a right-wing gunman attacked two mosques and killed 51, showed that some developed countries are facing problems in dealing with immigrants and cope with terrorism threats in their own countries, Li said.

“Instead of focusing on solving their own problems, they criticize China’s policies in Xinjiang, which has helped bring stability and peace to the region and effectively protect local residents’ rights to safe life and development,” Li said.

The joint letter and the continuing criticism of China’s Xinjiang policies show that some developed countries hope developing countries remain in turmoil and stagnation on development, which would fit the developed countries’ interests. And this is an inhumane practice, Li said.

On the sidelines of the 41th session of the UNHRC, China invited people from Xinjiang and envoys to the UN who had visited Xinjiang to share what they have experienced in Xinjiang.

Many of them said that Xinjiang has prioritized protecting the interests of people of all ethnic groups and taken measures to fight terrorism and extremism, chinanews.com reported on July 3.

Envoys from many countries, including Russia, Algeria, Laos, Serbia and Pakistan shared their experience in Xinjiang and praised the regional government’s efforts on poverty alleviation work, protection of religious freedom and effect of counter-terrorism measures.

The joint letter also called on “China to uphold its national laws and international obligations and to respect human rights and fundamental freedoms, including freedom of religion or belief.”

According to a white paper released by the State Council Information Office, the Xinjiang regional government has put priority on taking counter-terrorism measures and de-radicalization in accordance with laws, which include launching the education and vocational training centers.

Trainees sign agreements with the education and training centers before going there. The agreement presented by one trainee reached by the Global Times showed it contains training goals and methods, criteria for program completion and assessment methods.

Geng said at Thursday press briefing that “The Chinese government and people have the right to speak in terms of the Xinjiang policies. In the face of terrorist and extremist threats, Xinjiang has taken a series of measures, including the establishment of training centers, which help improve the security in the region.”

There has been no violent attack in Xinjiang for more than two years, and local residents’ sense of security and happiness has greatly improved. And they sincerely support the government’s measures, Geng added.

Traditions of religious people in Xinjiang have been given full respect. For example, residents in Xinjiang are given one day off to celebrate the Eid al-Fitr on June 5.

For those self-proclaimed victims, who said they “escaped” from the training centers and told their stories to some Western media, the Chinese government has confirmed that they fabricated their stories.

If the training centers are really “concentration camps” as they described, how could they manage to escape from the “strict surveillance” of the government? There are many loopholes in their stories which some Western media choose not to double check, experts said.

People who live in Xinjiang should have the right to say whether they are happy, not those who have other political purposes or seek personal gains under the guise of caring for Xinjiang residents, they said.

Zoo officials apologize for display of African man in 1906